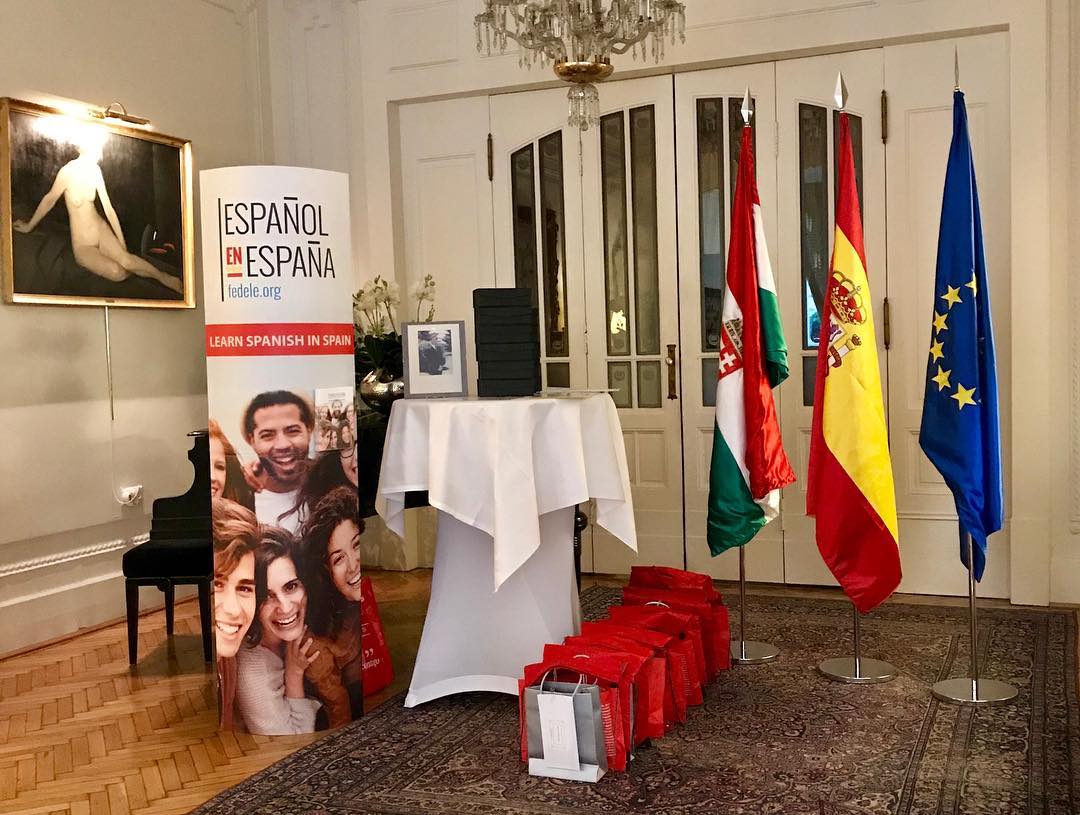 This has been the third year of the Spanish Embassy in Hungary Prize, in which FEDELE collaborates by sponsoring ten of our schools: Academia de español K2, AIL Madrid, BCNLip, Cervantes Escuela Internacional, Costa de Valencia, Debla, cursos de español, Instituto Andalusí de español, Instituto de idiomas de Ibiza, Proyecto Español Alicante and Spanish Courses Unamuno. FEDELE also sent a publicity totem and some pamphlets with information about our federation. The aim of the prize once again is to recognise academic excellence, creativity, extra-curricular activities and knowledge of the Spanish language amongst the most successful students in the bilingual schools in Hungary.

In her opening address, the Spanish Ambassador, Excma. Sra. Anunciada Fernández de Córdova, praised the efforts of the prize-winning students stating that they deserved respect and a special acknowledgement and also congratulated the teachers and parents for their unconditional support.  Members of the Selection Committee were able to see that the candidates showed talent and creativity and that they approached their academic work and their activites in other areas – music, dance and sports – with great conscientiousness.  All of them have demonstrated that as well as acquiring specialist expertise, they are generous people and eager to discover more about the world. The prize-winners are all young people in the last two years of bilingual Hungarian-Spanish secondary education, studying at one of the seven high-schools offering this type of course. High achievement and participation in a variety of activities like theatre, national and international projects, translation, different competitions, exchanges etc. were the criteria in the making the selection among the thirty-nine candidates.

The prizes were presented at an awards ceremony held at the residence of the Spanish Ambassador, on Saturday, 27th October. The prize-winners, their parents, teachers and heads of school were all invited to the ceremony. The twelve students each received a glass plaque with their name, a diploma and a voucher for a meal in one of the Spanish restaurants in Budapest. The top two students received a special prize of a Spanish course in a FEDELE school in Spain, including accommodation and travel, all thanks to the collaboration and contribution of various organisations like FEDELE, Spanish language schools, the University of Navarra, Turespaña, Instituto Cervantes, the Education Attaché Office and the Spanish Embassy. The schools chosen by the two winners are the Instituto Andalusí de Español (Málaga) and the Instituto de idiomas de Ibiza. Congratulations!