Prize for an outstanding academic career in the teaching of Spanish 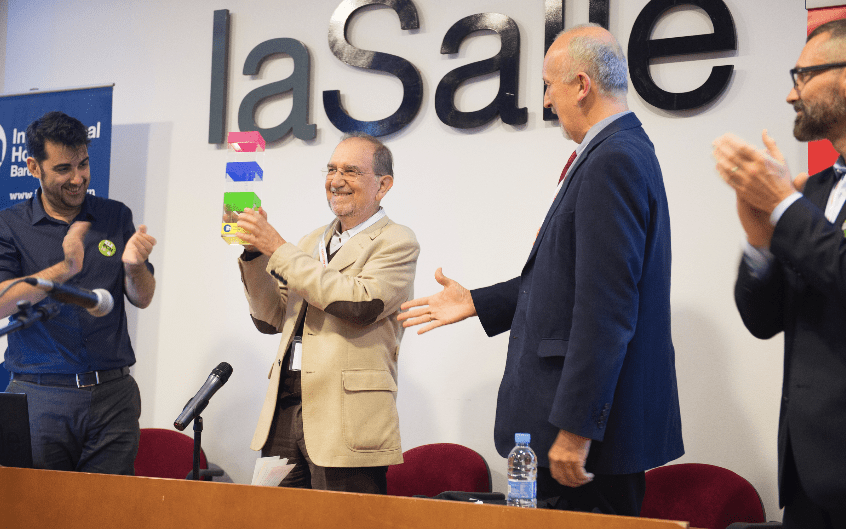 The prize for an outstanding academic career in the teaching of Spanish, awarded by the International House schools in Spain (Barcelona, Cadiz, Madrid, Seville, Palma, San Sebastian and Valencia) together with the publishers Difusión, was presented to Ernesto Martín Peris at a prize-giving ceremony on the 16th December.

Ernesto Martín Peris, emeritus professor at the University of Pompeu Fabra and the first academic director of the Instituto Cervantes, is a very well-known figure in the academic sector of Spanish as a Foreign Language teaching. As well as his experience as a teacher of ELE, while he was working as a professor at the Escuela Oficial de Idiomas de Barcelona, he developed some celebrated teaching material which includes Gente and Bitácora.

According to the committee organising the prize, “The criteria used for awarding the prize are: classroom experience, contributions to different aspects of the world of Spanish (teaching, publications, research, teacher training…) and the carrying out of professional work in different environments (public or private, in Spain or abroad, in statutory education or non-regulated schooling.”

The aim of the prize is to recognise the work of Spanish as a Foreign Language teachers and the continued effort to improve the quality of teaching. The ceremony was conducted by Francisco Herrera and the prize was presented by Jonathan Dykes, Director of International House Barcelona and Agustín Garmendia from Difusión. The ceremony was carried out as part of the programme of the Practical Course for Teachers of Spanish as a Foreign Language in Barcelona, in the presence of nearly six hundred teachers.