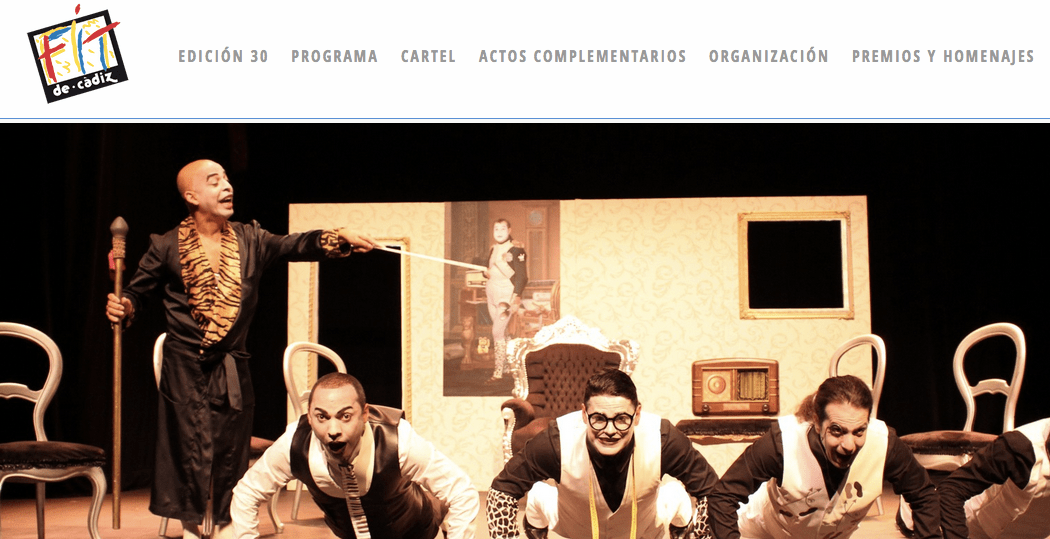 The Cádiz Latin  American Theatre Festival (FIT) has taken place in Cádiz every October since 1985.  From 1986 – 1992 it was directed by Juan Margallo.  There are both street performances and performances in various venues – the Gran Teatro Falla, the Sala Central Lechera and the Baluarte de la Candelaria amongst others.

The FIT is an ideal platform for providing support to Latin American theatre arts.  The main objective of this year´s festival is to continue to assist the future development of Latin American theatre.  This has been the case from the very beginning.  Different performances will again be providing a sample of the most representative theatre groups in Latin America today,   The festival brings together Spanish and Latin American companies and performing arts.  As well as theatre productions the programme includes a wide range of other complementary activities.

This multidisciplinary festival offers a chance to enjoy performances of theatre, dance and music and art exhibitions.  It has a family atmosphere and makes available a common space where theatre performances, international meetings, conferences, the presentation of projects and publications, workshops and forums are held with groups attending the festival, all coordinated by experts from Latin America.

The FIT has received many prizes for its work in Spain and Latin America, the most important being the  Medalla de Oro al Mérito en las Bellas Artes (Gold Medal for Merit in the Arts) in 2003 and UNESCO´s official patronage in 1994.  It has also been a partner festival  with the Festival de Teatro de La Habana (Cuba, 1995), Festival Latinoamericano de Teatro de Manizales (México, 1996), the FITAZ de La Paz (Bolivia, 2002) and the Festival de las Artes de Costa Rica (2008).

This is the 30th year for the Festival Iberoamericana de Teatro which will be celebrated from the 16th to the 24th October.  There will be performances in the streets of Cádiz every day.  This is a unique occasion for theatre lovers and lovers of Latin American culture.

More information is available on the FIT web site.