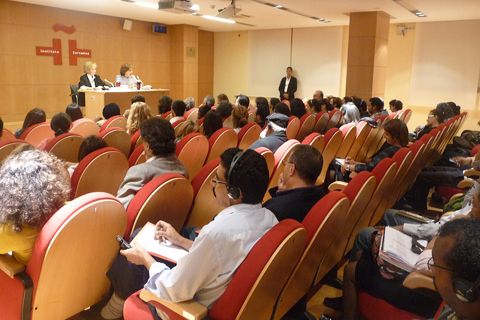 The 1st Conference of Spanish as a Foreign Language in the Magreb (CELEM) was held on the 11th and 12th of December at the Instituto Cervantes in Rabat.  Various Spanish and Moroccan organisations took part with the aim of learning about and developing strategies for promoting Spanish in the area.

The Directors and Heads of Study of all the Institutos Cervantes in the region came to the conference (four from Morocco, two from Algeria and one from Tunisia).  The manager of FEDELE, Ana Cozar, made a presentation of the private Spanish as a Foreign Language sector in Spain.

During the two days of the conference there were different informal meetings with the directors in which it became clear that there is an increasing interest amongst Cervantes students from Morocco and Algeria in coming to Spain.

The directors commented that they receive very little information from schools and that they have very few resources when it comes to offering their students information about where to study.

The Director of the Instituto Cervantes in Rabat, Javier Galván, and the Spanish Ambassador to Morocco  emphasised that they would be prepared to collaborate with both FEDELE and its associations in the promotion of Spain under the slogan Spanish in Spain.